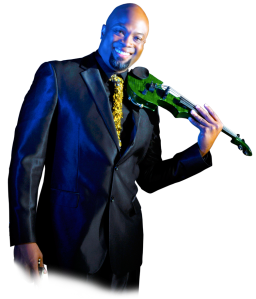 Electric.  A word that describes not only Ken Ford’s violin but aptly describes the man himself.  With his infectious energy, electric violinist Ken Ford has audiences up on their feet and into the aisles, taking the violin center stage as he rocks out with an inspired creativity and fervor that rivals the biggest and baddest guitar solos.  Now signed onto independent label Twelve Music Group as the first artist and album release on the label, Ken brings his celebrated live playing to audiences everywhere with the forthcoming release of his fourth album – State of Mind, taking listeners on a roller-coaster ride with songs that embody sexy, electrifying allure flavored with his compelling twists on R&B, hip-hop and jazz.

Born in St. Louis, MO, Ken grew up in Detroit, MI and Atlanta, GA – and with his dad being a DJ – indulged in bringing all the voices of the violin to life, surrounded by the sounds of jazz, blues, classical, and R&B music.  In his school years in Atlanta Ken was a founding member of the DeKalb Youth Pops Orchestra, and worked his way to the honored position of Concert Master in the African American Philharmonic Orchestra (AAPO), where he had the rare opportunity of performing for the late, great Barry White.  Indulging his passion for violin at night in Atlanta’s sizzling music scene while working as an IT programmer during the day, Ken’s talents attracted more and more attention from fans and peers, putting his career as a musician on the fast-track with his following multiplying on each successive album, from Burnt Toast to Chevelle Lane and his last release, Right Now.  Ken has also taken the sound of strings to another level from sensuous and funky to genteel, on stage and into the recording studio with a range of superstar artists including Bruno Mars, Jill Scott, Wyclef Jean, Chaka Khan, Ledisi, Brian Culbertson, Cee-Lo Green, Erykah Badu and more.

With a soul-stirring, extraordinary artistry that has captivated diverse audiences everywhere, including a standing ovation from an audience of over 20,000 at the renowned Sea Breeze Jazz Festival among other accolades, Ken Ford continues to plant the seeds for any music lover to discover violin on a whole new journey with him in concert and on his latest album State of Mind.  Whether sharing the power of music teaching kids through the Ken Ford Foundation or weaving through his audience bringing the vibrant sounds of the electric violin up-close to concert-goers, Ken continues “Living in the present moment” bringing his lifelong passion for music to others, changing their State of Mind about the violin in a symphony of lush, enchanting melodies.
# # #